An Island In the Sea of Mystery 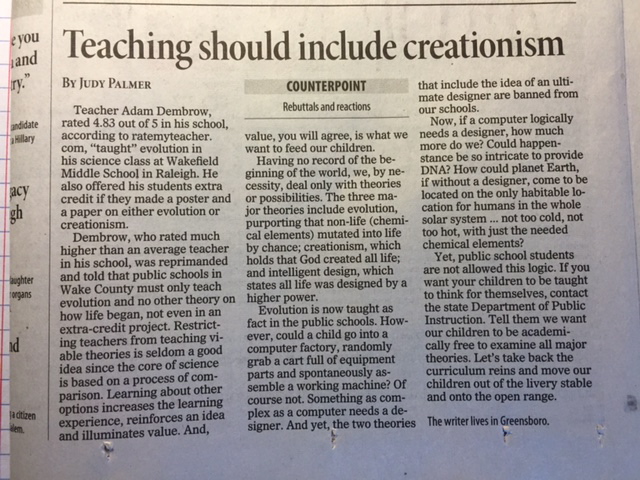 on Philosophy of Ignorance

We may need to adjust our science curriculum, as Judy Palmer writes (“Teaching should include creationism”  Greensboro News &Record, July 9, 2016), but not in the way she recommends. It’s pretty clear that her science education is incomplete.

In common usage, “theory” might mean a belief or an opinion. But in science, theories explain Laws and facts.

If you hold out your pencil and let go, it falls to the floor. An unsupported object will fall. That’s a fact based on observation.

Until Galileo, many thought heavier objects would fall faster than lighter objects. Galileo’s experiments at the Leaning Tower of Pisa showed that all objects fall at a rate independent of weight. We can test this and confirm that Galileo’s “Law of Fall” is right.

Galileo influenced others like Einstein to conduct more experiments. Einstein hypothesized about the relationship of the moon, planets, and Sun. In 1905 he published his “General Theory of Relativity” explaining why gravity works the way it does.

In science, we have to be able to make observations that might prove a fact wrong. If there’s no way to prove something wrong then it’s not a scientific idea. Creationism cannot be proven wrong, so it’s not science.

Even though some today may think it’s true, let’s not have our schools teach that heavy objects fall faster than lighter objects.

Even more destructive than mistaken opinion, Creationism is based on the assumption that no one is smart enough to discover the answer to a mystery. To answer any mystery with “God did it” is not science.  In his book “Death by Black Hole”  Neil deGrasse Tyson calls it a “philosophy of ignorance.”

Let’s not have our schools mislead children about the theory of evolution. Evolution is testable and has been confirmed in geological and fossil records. Creationism is the belief that God created all life. Since the actions of a divine creator are outside the abilities of science to test, they don’t belong in the science classroom.

Some are passionate about Creationism, but it’s based in religion, not science. And I find it unproductive to teach children that there are some things they can’t and won’t ever figure out. Creationism doesn’t encourage discovery, Creationism encourages ignorance.

We should keep science in our science classes and we should keep religious beliefs out. Neither science nor religion benefit when the two get entangled.

3 thoughts on “on Philosophy of Ignorance”